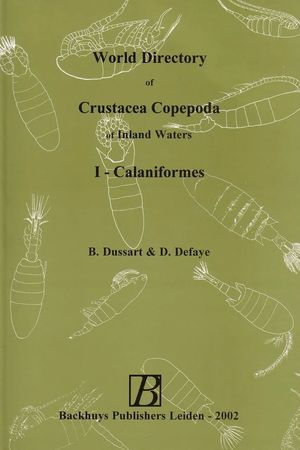 The first edition of this directory was published almost 20 years ago. Since then, numerous new species have been described, some genera and families have been revised, and new synonymies and updated keys have been published. These changes have all been incorporated into this extensively revised and enlarged English edition.

The 8 families treated are: Aetideidae, Clausocalanidae, Centropagidae, Pseudodiaptomidae, Acartiidae, Sulcanidae, Temoridae, and Diaptomidae (the most widely 2 distributed family of inland waters). All species described from 1898 until 2000 are included. The references cited in the taxonomic part are given in alphabetical order, and the abbreviations of the references follow the ISO-4 standards (ISDS, 1985 and following years). The scientific index includes the synonyms in Roman characters, which allows the reader to follow the trail of any citation to its present valid name.

For each genus, the type-species is given first and is marked by an asterisk; the order followed for the other species is chronological. For each species, a synonymy is given, followed by other specifying citations or references on morphology, physiology, biology, or ecology of the species; distribution is also given.

This is a definite reference work for all those involved in copepod research.