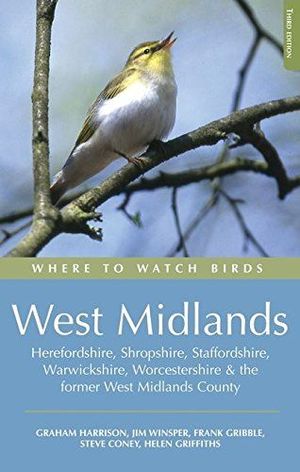 WHERE TO WATCH BIRDS WEST MIDLANDS *

Herefordshire, Shropshire, Staffordshire, Warwickshire, Worcestershire and the former West Midlands County are collectively known as the West Midlands. This is a region of contrasts: from the bleak moors of Peak District to the mellow hills of the Cotswolds; or from the wooded hillsides and streams of the Welsh border country to the lush valleys of the Avon. Within its rich mosaic of habitats can be found a combination of northern species such as Twite and Black Grouse and southern ones such as Nightingale; western ones like the Pied Flycatcher and the eastern Red-legged Partridge. Black Redstarts maintain a tenuous presence in the hub of Birmingham and the Marsh Warbler can still be found in Worcestershire. This third edition has been extensively revised and updated, with several new sites added and some existing site accounts considerably expanded. It is the essential tool for anyone birding in this rewarding region.