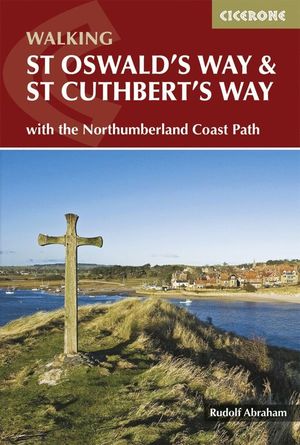 WITH THE NORTHUMBERLAND COAST PATH

This guide describes two long-distance trails through the unspoilt scenery of Northumberland and the Borders. St Oswald's Way begins at Heavenfield and its 97 miles take in rolling farmland and the Simonside Hills before reaching the vast sandy beaches of the coast. The 62 mile St Cuthbert's Way begins at Melrose and crosses the rugged crags and heather moorland of the Cheviot Hills. Both trails pass through Northumberland National Park to converge on atmospheric Holy Island, before continuing up the coast to Berwick-upon-Tweed. Each can be walked within a week, though there is scope for shortening or lengthening the stages to suit different itineraries. Also shown is the 64 mile the Northumberland Coast Path from Cresswell to Berwick, which covers the entire length of the Northumberland Coast AONB. The guidebook is crammed with interesting snippets of information, alongside indispensable practical details of transport and accommodation in the area. With varied scenery and a rich history encompassing spectacular castles, medieval abbeys and Roman remains, this is one of Britain's most beautiful corners to explore on foot.

Difficulty
No special difficulties to encounter on the routes in this guide, though a reasonable level of fitness is assumed. Some of the stages as described are fairly long, though they can be broken down into shorter sections. Crossing to Holy Island must be timed to coincide with low tide