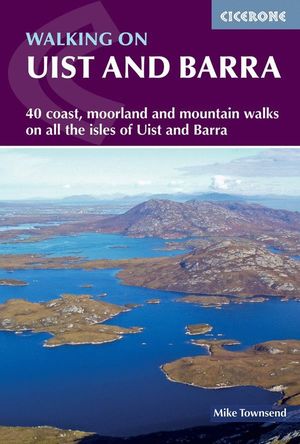 WALKING ON UIST AND BARRA *

40 COAST, MOORLAND AND MOUNTAIN WALKS ON ALL THE ISLES OF UIST AND BARRA

Located on the edge of north-west Europe, the islands that make up the southern end of the Outer Hebrides are places of staggering contrasts: rugged hills, shell sand beaches, awesome sea cliffs, caves and arches, moors and lochs. Although relatively accessible by air and by sea, much of the archipelago still remains unspoilt. Few who go there venture far from the roads.

This guidebook includes a selection of easy, coastal walks along beaches and cliffs but also some wilder and mountainous routes further inland, on Uist and Barra and on the offshore islands.

a variety of day walks across the islands from 3km to 17km
illustrated with OS map extracts and photographs
lots of information about wildlife, geology and history to accompany each route
other guidebooks for the Outer Hebrides include Walking on Harris and Lewis and Cycling in the Hebrides