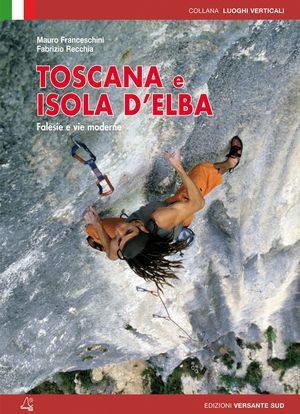 Climbing in Tuscany is particularly pleasant because it involves more than anywhere else all the senses. Magnificent views into charming valleys, rocky towers with routes for all tastes, ancient remains, great food and then the island of Elba surrounded by beautiful sea where the possibility to combine climbing with a seaside holiday will attract many.

In this fourth edition, the authors have added to and completed the material already present, in particular regarding the Sant’Anna crags and those in the Camaiorese, adding as well the many new multipitch routes dotted across the mountains of the whole region.
For the Camaiorese area in particular, the authors benefited from the input from the Versante Apuano association, among whose activists are some of the leading bolters of new routes and developers of this important area. ?The guide’s many photos make it a useful tool for getting to know this splendid area. It represents an important contribution to developing tourism here.

Mauro Franceschini (1959)
National CAI (Club Alpino Italiano, Italian Alpine Club) mountaineering and climbing instructor, director of the Scuola di Alpinismo “Lunigiana Verticale” which he founded in 1987.?Explorer and opener of new routes on rock and ice not only in the northern Apuane Alps, but also in the Mont Blanc massif and in Namibia. A farmer by choice, he lives and works fully immersed in the nature on his farm in Lunigiana.

Fabrizio Recchia (1965)?
Regional CAI mountaineering and climbing instructor, instructor for instructor training courses at the Scuola Interregionale di Alpinismo e Arrampicata Libera Tosco Emiliana Romagnola.?Fabrizio knows the Alpi Centro Occidentali well and often climbs here and likes to open new routes, not just in the Alpi Apuane: he has made first ascents in the Mont Blanc massif and in Namibia as well. He is a civil servant by profession.