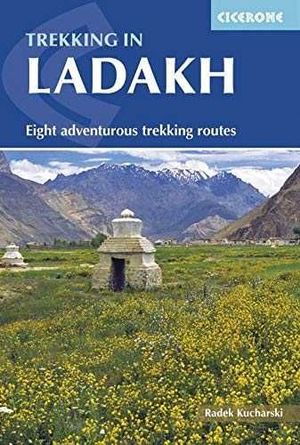 This trekking guidebook gives detailed descriptions of eight different treks across the Ladakh, Zanskar and Markha Valley in northern India. Ranging from moderate difficulty to very demanding, each trek is broken down into multiple stages, and has information on difficulty, available accommodation and access, as well as the many combinations and alternative routes open to exploration.

Known as Little Tibet; for both its landscape and culture, Ladakh lies at the northern tip of India. The region is bisected by the great River Indus and neighbours Tibet and Kashmir. This quiet corner of the Himalaya has developed a strong trekking culture over recent years for adventurous trekkers. Trekking in this remote, high-altitude region is extremely challenging, as paths are not signed and there are only a limited number of villages. However, its magnificent landscape (a huge area full of limitless trekking possibilities), hospitable people, rich heritage and limited number of tourists make Ladakh an amazing destination.

The guide includes background information on local culture, history and religion, as well as all the planning detail you need on crucial aspects such as environmental responsibility, health and safety in the mountains, trekking practicalities and preparation for altitude.

Seasons
Unlike other parts of the Himalayas, Ladakh is not normally hit by the Monsoon. Therefore summer (June to September) is the best trekking season.

Centres
Access is through Leh, the capital of Ladakh. The treks travel through towns and villages all over the Ladakh region, as well as the Zanskar sub-region and the Phukthal and Karsha monasteries.

Difficulty
High altitude, lack of lodges and restaurants as well as the remoteness of the region make trekking in Ladakh a rather challenging activity. Moderate to very demanding treks have been covered in the book. A number of local agencies can help organise the trip and make the trek much easier.