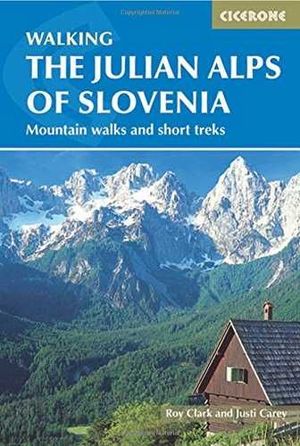 THE JULIAN ALPS OF SLOVENIA *

This guidebook contains over 60 walks which explores the best of the Julian Alps of Slovenia. The walks and treks in this guidebook are organised around five bases in the Julian Alps - Kranjska Gora, Bovec, Kobarid, Bled and Bohinj - all of which have a range of accommodation and public transport facilities.

There is something here for everyone - from easy valley walks and rougher forest trails to high-mountain protected routes, some of which require Alpine mountaineering experience. Several possibilities for multi-day walks are included.

The Julian Alps are situated in the small independent republic of Slovenia, at the south-eastern end of the Alpine chain. Their highest peak, Triglav, at 2864m, may be smaller than some of the better-known western giants, but what the mountains lack in stature they make up for in interest and accessibility. The dramatic limestone peaks drop steeply through forests to flower meadows, and will give you a feast for the eyes no matter which direction you turn.

Seasons
Early summer to autumn - late May/June to the end of September and early October in good years.

Centres
The routes are described from five bases, all of which have tourist infrastructure: Kranjska Gora, Bohinj, Bovec, Bled and Kobarid.

Difficulty
Some routes are valley walks, which almost anyone can do, while others are high mountain routes requiring mountaineering experience and a head for heights. Peaks are snow-free by early July in normal summers so ice-axe and crampons are not usually needed, and difficult sections are mostly covered by via ferrata style protection. Self-belaying (via ferrata) kit and a helmet are recommended. The book has a grading system from 1 (easy) to 4 (serious).