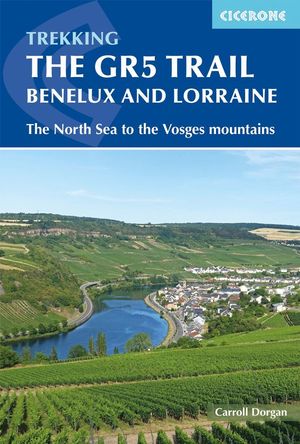 THE GR5 TRAIL : BENELUX AND LORRAINE *

THE NORTH SEA TO SCHIRMECK IN THE VOSGES MOUNTAINS

Guidebook to walking the northern section of the GR5 - 1000km starting in Hoek van Holland and passing through the Netherlands, Belgium, Luxembourg and Lorraine to Schirmeck in France. A long-distance route covering a variety of cultures and landscapes. The full GR5 from the North Sea to the Mediterranean is one of the world's greatest trails.

easons
A three-season trail, best between April and October. Abundant public transport links even make it possible to seize an opportunity to walk on the GR5 during fine days in winter.

Difficulty
The GR5 Trail - Benelux and Lorraine, also known as 'The Northern GR5' is relatively easy: level terrain in the Netherlands and Flanders; hilly, but not difficult in Wallonia and Luxembourg; mostly gentle slopes in Lorraine. The final stages of the walk enter the Vosges Mountains, where trails are steeper. No special equipment is needed, just comfortable walking shoes; some people use trekking poles.