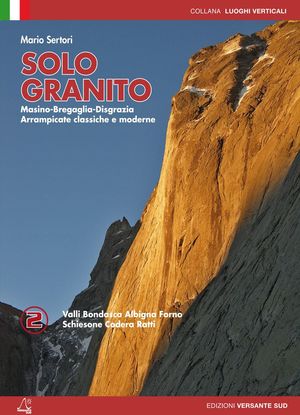 The second volume, following the first one, published in 2014 and covering the area of Val Masino and Disgrazia, reviews the imposing heart of the massif, climbing up the deep lateral valleys departing from Val Bregaglia and Val Chiavenna. This new edition, eight years after the first one, features two more valleys, located at their respectives antipodes: Val del Forno and Val Schiesone, secluded and incredibly attracting places.

The route description has been enhanced, especially as for the approaches, the descents and the topos.
All the sketches have been reviewed and amended if necessary, and several panoramic pictures enrich the topos. An interesting appendix presents the recounts of the most famous climbs and historical and biographical profiles of the most notable climbers.
Many novelties have been added, beginning with the crags at Capanna del Forno, Albigna, Sciora and Sasc Furä, to the astonishing modern multipitches on the Spazzacaldera, Badile and Ferro da Stiro, just to mention a few ones.

The whole area has been the object of desire for many generations of climbers, since the dawning of mountaineering. Some of them are renowned and celebrated, such as the North-East face of Badile, which have been attempted by climbers from all over the world, some others are secluded and misteryous, such as the North-West face of Sfinge, or even a bit gloomy, such as the Pizzo di Prata, yet all of them feature a dowry of exceptional climbs.
You’ll just have an embarassing wealth of routes to choose from!