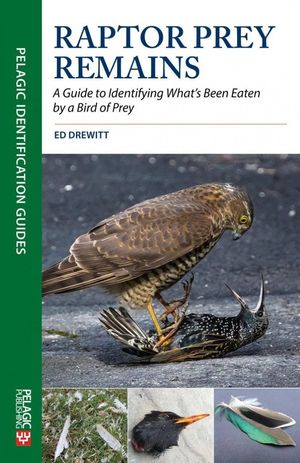 Are you curious about the remains of an animal you have found? This compilation of the most likely found body parts of animals eaten by raptors will help you identify your discovery. Including over 100 species of bird and mammal prey of raptors such as sparrowhawks, peregrines and hen harriers, this photographic guide highlights the common feathers, fur and other body parts found at raptor nests, roosts, plucking posts and other opportunistic spots.

Discovering what raptors eat is an important part of confirming their feeding ecology and how this might change over time, vary on a local level or in response to changing prey populations, as well as dispelling myths and assumptions about what certain raptors species eat. Diet studies are vital for the conservation of raptor species; the more we know about what they need for survival the more we can predict and plan long-term for the protection and survival of raptors that may be vulnerable and in decline.

This is the first book to show in detail the actual parts of a bird, mammal or other animal that you are likely to find in a garden, woodland or beneath a raptor roost. As more people take an interest in raptors and watch species such as peregrines via webcams and through watch groups, there is greater opportunity for finding prey remains. Raptor Prey Remains provides the first and most important step in identifying a prey species.

Contents
Introduction
Finding raptor prey remains and next steps
- Where to begin
- What’s been at work? A mammal or bird predator?
- Signs of predation
- Visiting regular prey sites
- Collecting safely
- Working out how many individuals of species you have
- Building up a reference collection and protecting from insects
- What clues do different raptors leave behind?
- Identifying prey using resources such as books and websites
- My own story – identifying peregrine prey
- How do I know my feathers?
Parts of a bird
Glossary
Prey species