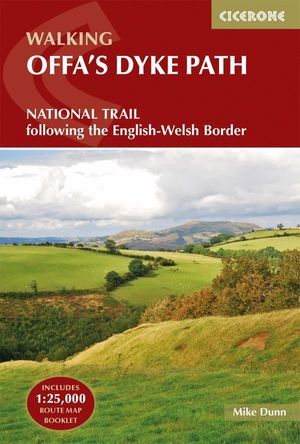 This guidebook - which includes both a guide to the route and a separate OS map booklet - describes Offa's Dyke Path National Trail from south to north, following the longest linear earthwork in Britain, running 177 miles along the English-Welsh border between Sedbury (near Chepstow) and Prestatyn on the north Wales Coast. It links the Severn Estuary and the Irish Sea, following the longest linear earthwork in Britain, contouring above the Wye and Dee, visiting hillforts and Norman castles and exploring the hidden heritage of the Marches. The route is exceptional in all seasons, although the Black Mountains and Clwydian range deserve respect in winter conditions.

The guidebook splits one of Britain's classic trails into 12 stages, with suggestions for alternative 8 and 16 day schedules. This is a long but not too difficult walk for walkers of all abilities. Step-by-step route descriptions are accompanied by 1:100,000 OS mapping. A trek planner gives at a glance information about facilities, public transport and accommodation available along the route. Also included is a convenient booklet of 1:25,000 OS maps, which provides all the mapping needed to complete the trail.

The walk is astonishingly varied, taking in the lower Wye gorge, the Severn and the Dee rift valley, the pastures and woodlands of the border country, the remote moorland of the Black Mountains and the Clwydian range, and the dramatic limestone escarpments of Eglwyseg mountain. What makes it even more special is over 60 miles walking alongside the Saxon earthwork of Offa's Dyke, the path sometimes on the Dyke and sometimes alongside