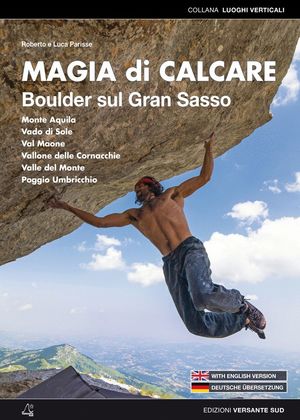 This is not just a climbing guide. It’s the story of 10 years of bouldering on the Gran Sasso.

Finally there is a guide for beginner and experienced boulders who want to climb hundreds of problems of any difficulties on some of Italy’s best known limestone.

Many problems, explanatory key and descriptions for each problem, accompanied by maps and breathtaking photos for a guide which will be a “must” for every climber.

A timeless journey through the splendid summer climbing areas of Gran Sasso, enjoying the purity of the athletic moves that characterise bouldering.
A heartfelt thanks is due to the “brothers”, cleaners and above all “porters” Roberto “Riskio” Valentini and Matteo”Ruanda” Cittadini.

Roberto and Luca Parisse
The Parisse brothers have climbed since they were kids.

Climbing is for them both a way of life and a source of income as the co-founders over twenty years ago of L’Aquila’s first climbing gym, El Cap. where they work as instructors.

Right from the start they were almost exclusively boulderers in the boom period for this discipline, learning technique and style from the leading boulderers of the time Mauro Calibani, Bertrande Lamaire and Stefano Finocchi at Meschia (AP), the Italian Fontainebleau.

They took part in the first bouldering competitions in Italy and were top-ranked for many years, with Luca being selected for the World Bouldering Championship at Chamonix in 2002 and for the following year. They have made many first repeats of Italy’s most famous boulder problems and also outside Italy, such as in France, where Luca made the eight ascent of Karma, Fred Nicole’s famous problem, after the key hold broke. They often travel to Spain and to Switzerland to climb.

In 2003 Roberto moved to Brescia for work and in the following years explored and developed one of the best bouldering areas in Trentino, the Val Daone, taking part in its development and authoring the first bouldering guide to the area (with Versante Sud).
In 2010, after the terrible L’Aquila earthquake, they decided to start their project “Magia di Calcare” which would take 5 years to complete, including the making of a documentary film which through stories of the mountains and images of climbing conveys the magic of bouldering on Gran Sasso.

This ambitious and unique project enabled the writing and publication of this guide, thanks to the help from Versante Sud. Today the Parisse brothers are among the most active and strongest boulderers in the centre of Italy, and also sport climb and bolt Abruzzo’s hardest sport and modern multipitch routes.
They are almost always to be found in summer jumping from one boulder to another in the valleys of Gran Sasso, or at Poggio Umbricchio in Val Vomano. There’s no doubt that they have written part of the history of bouldering in central Italy and today are admired by many young climbers.