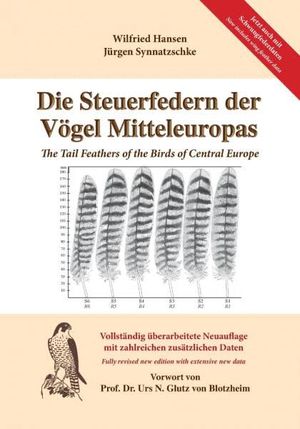 Die Steuerfedern der Vogel Mitteleuropas / The Tail Feathers of the Birds of Central Europe is a potential new classic of ornithology in the making. The author Wilfried Hansen, together with his co-author Dr Jurgen Synnatzschke and a large number of scientific collaborators, spent over 40 years producing this historic work. So far this information was scattered in 11 separate issues of the scientific journal Beitrage zur Naturkunde Niedersachsen, most of which are now out of print, and was only accessible to a small number of experts. These scattered issues have now been revised, updated with extensive new data and united into a single book. Books with detailed descriptions of feathers are rare. No other treatise on feathers contains such a wealth of scientific information. In addition to identification keys for all species and precise data on the tail feathers (rectrices),

The Tail Feathers of the Birds of Central Europe also contains measurement tables for the wing feathers. Due to the excellent drawings, in which the identifying characters of the tail feathers of more than 300 bird species are described, and the extremely detailed descriptions, this impressive work was praised by Professor Urs N. Glutz von Blotzheim, who wrote the preface, as "the most useful instrument for the identification of pluckings that exists so far". The Tail Feathers of the Birds of Central Europe includes over 600 measurement tables (for some species with over 1,000 measurements), and 322 ink drawings in black and white. Each species account is structured into identifying characters, distinguishing features from similar species, detailed description of colouration, shape, length distribution of the individual feathers and characteristics of sexing and ageing. It is an English summary as well as English explanations for all images and tables make The Tail Feathers of the Birds of Central Europe accessible to an international public.