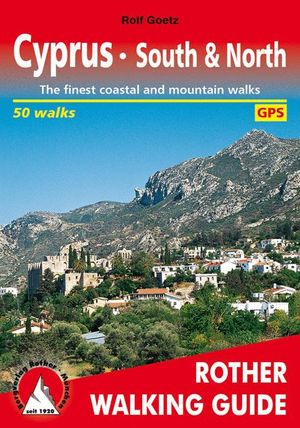 THE FINEST WALKS ON THE COAST AND IN THE MOUNTAINS

Cyprus is not only famous for its cultural heritage and 9000 year old past – »Aphrodite’s Island« is one of the most popular hiking destinations in the eastern Mediterranean. The centre of the island is dominated by the Troodos mountain measuring some 2000 m in height, which despite its considerable altitude is more reminiscent of European low mountains, due to its softly rounded and forested peak.

This Rother hiking guide proposes 50 routes mostly ranging from easy to medium level. Next to mountain tours, it also includes a selection of coastal paths along bizarre cliffs and adventurous ravine tours. Forest paths and nature trails lead through aromatic cedar woods, silent valleys and to remote Byzantine churches and monasteries. Classic spring tours are those which take visitors across the peninsula of Akamas, when colourful carpets of flowers and orchids blossoming by the wayside unveil their typical Mediterranean charm.
Cyprus extra: an ideal vacation includes hiking and swimming on white sandy beaches – the water temperature on the sun-bathed »island of the gods« reaches more than 20 degrees Centigrade even in the month of November!