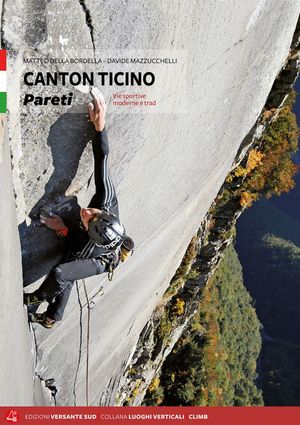 The publishing project focused on Canton Ticino walls comes to a fulfilment with this guidebook reviewing the modern multipitches – including modern, sport and trad climbing.
?The area, in addition to many interesting crags, features wonderful routes on an excellent granite – one of the best in the Alps.
The mild climate and the great variety of Ticino walls are favoured by many climbers coming from all over Europe, especially the nearby regions north of the Alps.
This accurate and detailed guidebook has been compiled by the same authors who signed the volume describing the crags of Varese and Canton Ticino. They are both locals, and very active in promoting climbing in this area, where they sent many routes.
Thanks to a networking effort with other local climbers they gathered a comprehensive set of up-to-date and detailed topos, including unpublished novelties, thus providing an extra-high accuracy.?The work is enriched by several articles and features, written by the authors themselves, relating their personal experiences on the walls of Ticino and interviews with the main characters of the local climbing community.

Matteo Della Bordella,
born in Varese in 1984, graduated in industrial engineering. He climbs since he was 12. He ahs repeated many routes all along the Alpine range, including several high-difficulty ones, such as Pesce, in Marmolada, first climbing many extreme routes.?A member of Ragni di Lecco since 2006, he’s fond both of free climbing, mountaineering, extra-european expeditions. Amongst his most important feats, the first ascent of West face of Torre Egger, in Patagonia (2013), the first ascent of South-West face of Uli Biaho Tower (6109 m), in Pakistan, and an expedition “by fair means” to the Shark Tooth, in Greenland (2014). When he’s not travelling and climbing around the world, you can easily meet him somewhere on the walls of Ticino, where he sent and equipeed plenty of interesting routes, including very demanding ones.

Davide Mazzucchelli,
born in Varese in 1976, is a textile-IT consultant. He’s married and a father of two, and introduces himself as a plain “mountain lover”, practicing rock, ice and mixed climbing and ski mountaineering.?He has explored the whole Alpine range, focusing especially on the less known – and most fiddly! – routes. The Ticino walls are his training ground. He loves setting new routes, favouring a clean style, he enjoys retracing the routes of the “Old Masters” of mountaineering, challenging winter climbs and savouring the intensity of solo climbing.?He has co-authored, together with Matteo Della Bordella, the guidebook reviewing the crags in Varese and Canton Ticino.