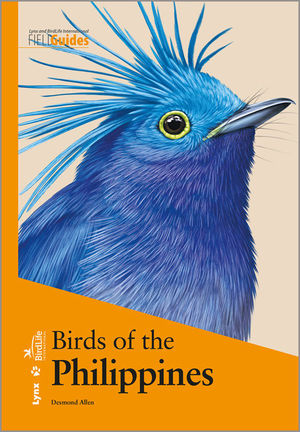 BIRDS OF THE PHILIPPINES

The world’s fifth-largest island nation comprises in excess of 7600 islands and islets, and is one of the most populous and ethnically diverse in all of Asia, with more than 180 native languages still spoken. To birders, however, the Philippines is famed for the country’s remarkable endemic avifauna. Of the 726 species or distinctive subspecies groups covered by this book almost 300 occur nowhere else on Earth. Sadly, the looming threat of extinction, due to sometimes rampant and ongoing habitat loss and fragmentation, imperils many of these species: among the endemic birds, no fewer than 75 are categorized as Vulnerable, Endangered or Critically Endangered. These unsurprisingly include some of the Philippines most sought-after birds, from the stunningly beautiful Palawan Peacock-pheasant to the emblematic Philippine Eagle, via an array of secretive pigeons, spectacular kingfishers, hornbills and broadbills, fancy woodpeckers, no fewer than 17 owls, and of course many babblers and flycatchers. If this was not enticement aplenty, in addition to the resident backbone, the islands receive many visitors, including migrants moving between northern Asia and Australasia, whereas others such as the globally threatened Chinese Crested Tern have only recently been discovered to winter in the Philippines.