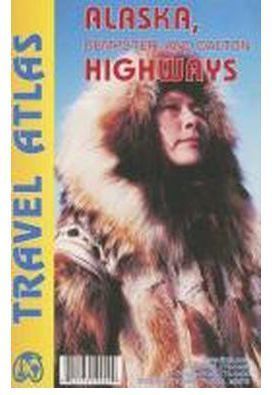 This handy Travel Atlas covers the three great highways of the American Northwest. The territory of Alaskan part is at scale 1:1,500,000, the Yukon is at 1:1,000,000 and the British Columbian area at 1:1,250,000. The route begins at the border of British Columbia and Alberta, at Ft.St.John and Dawson Creek, and, alternatively, at Prince Rupert, BC (Stewart Highway). It leades to Fairbanks, AK (Alaska Highway), then to Prudhoe Bay (Dalton Hwy), while the Dempster Hwy branches off to Inuvik in Canada's Northwest Territories. Included are insets with street plans of central Dawson City, Whitehorse and Watson Lake. Size 22x15 cm (8.5 x 5.75 inches), 48 pages, saddle stitched.