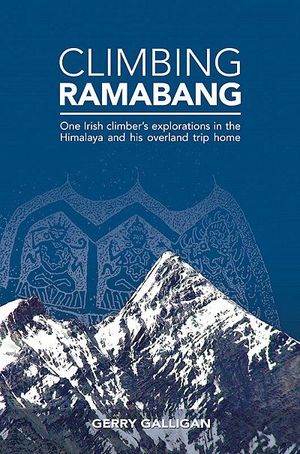 EXPLORATIONS IN THE HIMALAYA AND HIS OVERLAND TRIP HOME

Gerry Galligan's first book is a bold and expansive travel diary recounting his assembling of a small team of Irish mountaineers and their attempts on unclimbed mountains and unexplored valleys in the remote corners of the Indian Himalaya.

Getting there, the team see the hardships of the sub-continent, while in the mountains they experience storms, dangers and failure before ultimately, success and contentment. But it is when Gerry returns to the mountains alone and his subsequent experiences overlanding across Asia and Europe back to Ireland that we start to get a glimpse of the big, wide world out there.

A world of temples, festivals, holy cows, Kalashnikovs, donkey herders, corruption, opportunists, stoners and sages. Gerry gives us an insight into the day-to-day lives of mountain peoples, the dysfunctional functionality of India. He finds charm and tolerance in Pakistan and a surprising openness in today's Iran. We travel across rural Turkey and work our way back to the efficient and affluent West, where right on cue Gerry meets his first breakdown on a German train. Climbing Ramabang; One man's understanding of mountains, myth and mayhem.

Gerard Patrick Galligan was born in Donegal in 1966. He has climbed extensively at home, in Britain and in the Alps, and developed numerous rock climbs around Ireland. Among them Chasing the Dragon (Wicklow), Karmic Retribution (Burren) and Blind Faith (Connemara). Further afield he has climbed in Norway, the Rockies, Andes and Garhwal Himalaya. His films, Ramabang; No Man Before Us and Sufi have been widely acclaimed at International Mountain Film Festivals. He holds an MBA from Henley, works in the IT industry in Dublin, and has served as Chairman of the Irish Mountaineering Club.