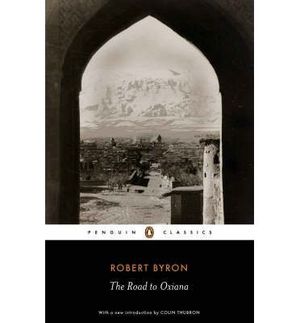 THE ROAD TO OXIANA *

A real-life adventure that inspired countless travellers in fact and fiction, the Penguin Classics edition of Robert Byron's The Road to Oxiana includes an introduction by Colin Thubron.

In 1933 Robert Byron began a journey through the Middle East via Beirut, Jerusalem, Baghdad, and Teheran to Oxiana - the country of the Oxus, the ancient name for the river Amu Darya which forms part of the border between Afghanistan and the Soviet Union. The Road to Oxiana offers not only a wonderful record of his adventures, but also a rare account of the architectural treasures of a region now inaccessible to most Western travelers.

Robert Byron (1905-41) was born in 1905, and educated at Eton and Merton College, Oxford. He died during the Second World War, when the ship he was serving on was torpedoed by a U-Boat off Cape Wrath. Byron's The Road to Oxiana is considered by many modern travel writers to be the first example of great travel writing.

If you enjoyed The Road to Oxiana you might like Charles Darwin's The Voyage of the Beagle, also available in Penguin Classics.

'The greatest of all pre-war travel books'
William Dalrymple

'What Ulysses is to the novel between the wars, and what 'The Waste Land' is to poetry, The Road to Oxiana is to the travel book'
Paul Fussell

'In any list of the great travel books of the 20th century, Robert Byron's account of his travels in Persia and Afghanistan, The Road to Oxiana, must be put somewhere near the very top'
Telegraph