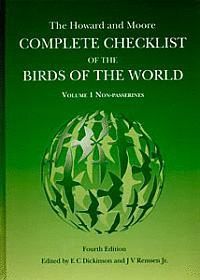 This is a new edition of this work. Due to its increased size, the fourth edition has been split over two volumes, with Volume 1 listing the non-passerines and Volume 2 listing the passerines.

The fourth edition of The Howard and Moore Complete Checklist of the Birds of the World has been updated to reflect the considerable change in our understanding of the evolution of birds derived from the study of their DNA over the past decade; thus the Cracraft sequence, adopted in 2003, is completely revised here. The new edition also reflects revisions to species limits and includes newly discovered species and subspecies. For each genus, type designation details are now given, and superspecies groups are frequently mentioned in the footnotes. Evaluation, as before, is based on the Biological Species Concept, carefully and conservatively applied. Range statements have been totally revised, particularly for the Americas. Overall the number of footnotes and references cited nearly doubles.

Includes a CD-ROM with the following appendices:

This reference work was initiated by Richard Howard and the late Alick Moore and first appeared in 1980 under an Oxford University Press imprint, intended for birders. A revised edition appeared in 1991 with Academic Press. Three years later Alick added an Appendix, in fact an update, in a 1994 reprint – which should have been called the third edition but wasn’t! Following Alick’s early death an extensively revised 3rd edition was developed under the management of Edward Dickinson involving a Regional Consultant for each of five regions. This was expanded to include content that would appeal to working ornithologists, deliberately widening the target audience. This was contracted with Academic Press who soon afterwards sold their work in progress to A&C Black and the 3rd edition appeared in 2003 under the Christopher Helm imprint (with a Princeton University co-edition in America). In the 3rd edition the list sequence changed dramatically guided by Joel Cracraft and it was concluded that family level taxonomy was in flux and affinities sufficiently unclear that ordinal ranks would be better not be used

This, the 4th edition, involving an even stronger team of authors, further develops the expansion with new features, and has taken the process of verification of the underlying data considerably further – although this work has revealed the extent to which ornithology lacks complete data-basing of all the scientific names validly proposed for birds – whether in use or in synonymy – and the creation of synonymies sufficiently elaborate to allow unused names to be linked to their used senior synonym. However, the project database has necessarily had more restrained objectives, geared to making it possible to provide timely updates at determined intervals over the years before any future print edition.

In several contexts a beginning is made in this volume on tasks which will need evaluation based on reader’s feedback and then gradual completion over time; this applies to the indications of subspecies groups, the footnoting of reported superspecies, and the triage of subspecies to weed out names based on points along a cline and others that are almost certainly undiagnosable.

The assimilation of molecular studies has been careful – helped by a specially appointed Advisory Committee – and very largely quite conservative in application at species and genus level. Above the genus level where phylogenetic results are usually accorded more reliability conservatism again rules but the very substantial output in the last decade has required a further significant change is family sequence and also allowed a restoration of ordinal ranks. The opportunity has been taken to restore consistent suffixes (name endings) at each of the hierarchical ranks used.

“Van” Remsen has played a key role, recognising that ornithologists have had difficulty tracing historical decision points and authorities for changes in taxonomy. The footnotes have attacked this challenge and authorities have been found for almost all decisions since the Peters Check-list series and as far as possible the original proposals for change are cited. The result of longer footnotes and more references, combined with the much more extensive range statements developed for the Americas, is a necessary split into two volumes. This volume, the Non-Passerines, alone contains more references than the entire 3rd edition. An accompanying CD includes several important appendices including both a gazetteer and several colour maps.

A series of updates is promised and volume 1 contains an application for a licence to download the first few updates which will be free. A small subscription will be requested after that which will be modest compared to what will be offered.

Finally, the ownership of the title of the work has been assigned to The Trust for Avian Systematics so that this reference work can be easily recreated in the future using a licence from the Trust to employ this title and the content of the editorial database which the Trust also owns. Legal structures are in place to guide the future evolution of the work with each Managing Director expected to find and appoint a successor.