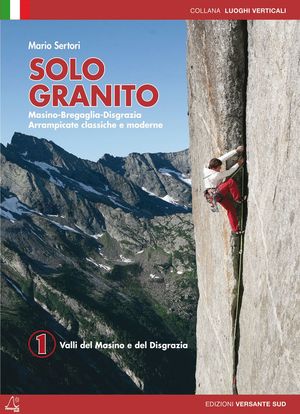 This book is a true reflection of what has been done until today in the upper valleys of Masino and Disgrazia, from great classic routes to the latest creations in a more sportive style.

Seven years after the first edition, this second one has been expanded in the descriptive part, in particular about accesses, descents and the reports of the itineraries. All the drawings have been updated and we enriched the book with panoramic pictures of large format.

There’s not only the technical part, but we added stories of ascents narrated by the protagonists, with profiles of the great alpinists that contributes to the evolution of climbing in that region.

About the Author
Mario Sertori is mountain guide since 1991. His vertical path started right on the rough rock of these mountains. He likes to climb and to write: several of his adventure reports have appeared on specialized magazines translated in many languages, even Icelandic!

In 2004 he published the volume “Cascate – Lombardia e Svizzera” for Blu Edizioni, in 2007 (co-author Guido Lisignoli) “Solo Granito” for Versante Sud, which dealt with Mello Valley and upper Masino Valley, in 2009 “Alpine Ice“, in 2012 “Ghiaccio Svizzero” and in 2014 a new edition of “Solo Granito” For three years he was managing editor of up-climbing.com.