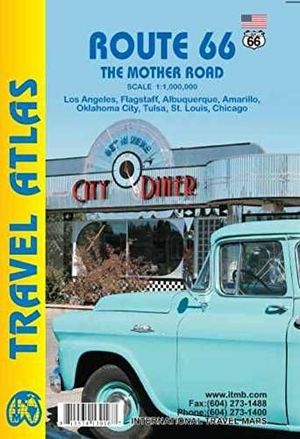 The "Mother Road" of the USA is one of the most famous highways of the world, ranking in importance with adventure highways such as the Karakorum. When the highway was developed in the 1920s, America was just discovering the automobile and long-distance roads were visionary. This road assumed monumental significance in joining the western half of America to the more developed East. Initially a dirt track, it was paved as a massive 'make work' project during the Great Depression, and millions of destitute Americans moved along it to reach California and, hopefully, future prosperity. During WW2 and the Korean War, it was the route of preference to move large numbers of troops to training camps and embarkation points. Today, it has been replaced by super-motorways, the US Interstate system, but large portions of original highway remain, as well as many buildings from the early days of travel. Immortalized and romanticized by several movies, a TV show, and various songs, Route 66 symbolizes everything that means America.

This atlas shows the route from its origins in Chicago, through Illinois and other States to California and its terminus in Santa Monica. Not only is the route followed and filled in with capsule comments about attractions en route, it includes all parks, historic sites, and attractions within reasonable driving distances from Route 66. This is the only highway in the world to have its own atlas. It is beautifully arranged and very detailed. It covers the entire 2,400 miles of the Route and includes many detailed city plans of urban areas along the highway. As a bonus, the Las Vegas and San Diego urban areas are included; 64 pages, printed on paper, saddle stitched.