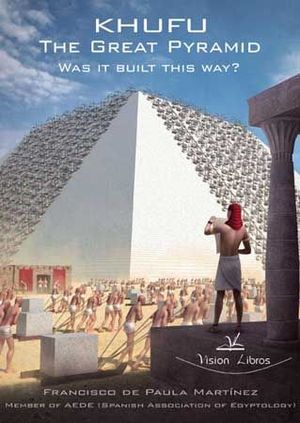 THE GREAT PIRAMID : WAS IT BUILT THIS WAY?

F O R E W O R D Francisco de Paula was obsessed with the pyramids construction problem until he developed a theory so attractive it is probably the correct one. This is because although it includes a technical side that could give the impression of being involved and difficult to read, on the contrary it guides us as we look into it in such a pleasant, sensible and logical way that on finishing the book we are convinced of how good his theory is and captivated by those Egyptian architects and engineers who 4,500 years ago knew how to create such wonders for the astonishment of todays world, using for their construction in addition to stone, water, logs and ropes the human work-force and mainly their intelligence and wisdom. The book is very attractively designed, with more than 200 photos and drawings, apart from the sufficient and precise calculations which amply prove the soundness of this theory. This experienced pyramidologist has followed Herodotus story where, in his second book dedicated to Euterpe expressing his conversations with Egyptian priests, he writes: The priests themselves were reading to me in a book the catalogue of the 300 Pharaohs subsequent to Menes. Also, talking about Khufus pyramid and its construction, he wrote: The pyramid was being built so that there were ledges or steps, which some ones call scales and other altars. Thus built, beginning from the bottom part, they raised the blocks, already carved, into place by means of machines made of short wooden planks. The first machine raised them from the ground to the top of the first tier. On this one there was another machine, which received the block upon its arrival and conveyed it to the second tier, whence a third machine advanced it still higher. Either they had as many machines as tiers in the pyramid, or possibly they had but a single machine which, being easily movable, was transferred from tier to tier as the block was unloaded, for it is good to give all kinds of diverse explanations. Thus, the facade began to be polished from the top, lowering later onsecutively so that the lower part, which was based on the ground, was the last one to receive the treatment. Egyptian letters are written down in the pyramid telling how much was spent on radishes, on onions and garlic for the laborers and officials to consume; and I remember perfectly well that when reading it, the interpreter said to me that the account amounted to 1,600 talents of silver.