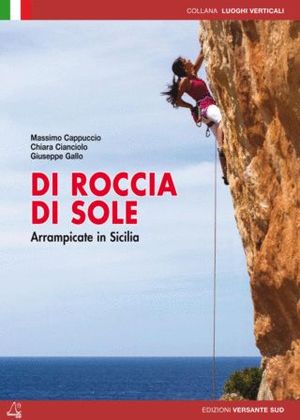 Four editions in little more than ten years. This figure alone gives you an idea of how much the world of climbing in Sicily has evolved. So many new developments, starting with the new sectors described in Palermo and in Syracuse, the addition of all the new recently bolted routes at San Vito Lo Capo, and the updating of the routes’ grades. The chapters dedicated to bouldering and dws are also new, activities practised more and more on the island. Syracuse by now has become an international area for deep water soloing, and the bouldering areas between Catania and Messina are being visited more than ever.

Even the number of multi-pitch routes has increased, some of the big names in world climbing have left their mark on the highest walls and the best and most spectacular routes are between Palermo and Trapani. In order to describe all this we now have three authors, as well as Massimo and Peppe, we have Chiara Cianciolo from Palermo who is passionate about sport climbing.

A vertical universe described in detail with dedication and passion, a valid instrument, engaging and substantial, to help you move with agility across the island’s rocks.

UPDATE:
The crags of Castelmola – namely, the sectors: IL MASSO and SETTORE SUPERIORE, are closed: climbing is prohibited due to trespassing on a private property.
DO NOT go climbing there, NOR walk along the access trails: you’ll be reported to the authorities for trespassing.

About the Authors
Massimo Cappuccio born 1966, a naturalist and environmental guide. He started climbing in the 90s and was one of the first in eastern Sicily to become a sport climbing instructor and from the very beginning devoted his energy to the development and promotion of this sport. In the Syracuse area, where he lives, he bolted the first sectors, opened up various multi-pitch routes (trad and sport) and started the first indoor climbing gym. A great traveller, a trekking and mountain bike enthusiast, he has travelled in the most remote areas of the five continents. Today he also organises sporting events which promote Sicily through climbing and sport tourism.

Chiara Cianciolo, born 1976 in Palermo, started to climb when she was 16 years old, under the guidance of Roby Manfrè. Outdoor sport and sport climbing in particular have always been her passion. Since 2008 her work as a university researcher has taken her to live and climb in Spain, the United States, New Zealand and Switzerland. Despite being abroad for so long, the sunny crags of home are where she prefers to be and, thanks to her many trips back there, she has always kept herself up to date and takes part in the latest developments in climbing in Sicily.

Giuseppe “Peppe” Gallo, born in 1965 in Palermo, is a national climbing instructor of the Italian Alpine Club (CAI). He gained his experience in the Alps, making prestigious ascents on rock and ice, while also taking part in extra-European expeditions. He has a wide knowledge of the Sicilian territory including Etna, on whose slopes he lives and works, and for some time now has been involved in the development of climbing in this region, where he has repeated all the most classic ascents opening numerous new routes.