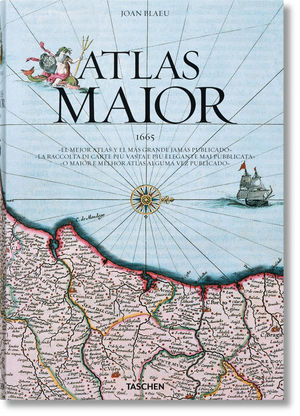 Superlatives tend to fail in face of Joan Blaeu s Atlas Maior, one of the most extravagant feats in the history of mapmaking. The original Latin edition, completed in 1665, was the largest and most expensive book to be published during the 17th century. Its 594 maps across 11 volumes spanned Arctica, Asia, Europe, and America. Its scale and ambition occupies such an important place in Dutch history that it is included in the Canon of Dutch History, an official survey of 50 individuals, creations, or events that chart the historical development of the Netherlands.

TASCHEN s meticulous reprint brings this luxurious Baroque wonder into the hands of modern readers. In an age of digitized cartography and global connectivity, it celebrates the steadfast beauty of quality print and restores the wonder of an exploratory age, in which Blaeu s native Amsterdam was a center of international trade and discovery.

True to TASCHEN s optimum reproduction standards, the edition derives from the Austrian National Library s complete colored and gold-heightened copy of Atlas Maior, assuring the finest detail and quality. University of Amsterdam s Peter van der Krogt introduces the historical and cultural significance of the atlas while providing detailed descriptions for individual maps, revealing the full scale and ambition of Blaeu s masterwork. As much an artwork as a cartographical adventure.