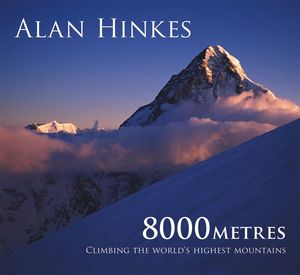 In this book, renowned British mountaineer Alan Hinkes relates his experiences of climbing all 14 of the peaks over 8000m: the world's highest mountains. Alongside stunning photography, he describes his expeditions - many as Alpine-style ascents - capturing the beauty, harshness and danger of these mountains.

To climb one 8000 metre peak is extraordinary. To conquer all 14 is an almost incomprehensible challenge. Only 14 men had ever completed the 8000ers, until 2005, when Alan Hinkes became the first Briton to climb his way into that rarefied club.

This book is the first autobiographical work by Hinkes, and chronicles his expeditions to the Himalaya in Nepal, Pakistan and Tibet, and his climbs; from the first British ascent of Manaslu, to multiple 'Alpine style' ascents and the final test of snow-bound Kangchenjunga. High-altitude climbing is a dangerous business, but Hinkes balances nail-biting moments of avalanches, extreme cold and dealing with the 'Death Zone' with memories of great climbing companions, base-camp communities and the pleasure of a good cup of tea once the climb is done.

As well as being an exceptional mountaineer, Alan Hinkes is also a professional photographer. Taking great pictures at high-altitude is notoriously difficult, given the environmental dangers to both camera and cameraman. But Hinkes has collected together his most outstanding shots which capture the true nature of the world's highest mountains.

'No mountain is worth a life, coming back is a success and the summit is only a bonus.' This philosophy carried Hinkes over one of the harshest landscapes on Earth, and follows him into his book. Above all, Hinkes writes of his love of the mountains; his story is not one of cheating death, but of living life to its fullest, and highest extent.

Foreword by Brian Blessed, who joined Hinkes on an expedition to Everest. Afterword by Joe Cornish, on the beauty and perils of mountain photography.
Vivid, uncompromising accounts of Himalayan mountaineering.
Vignettes of life in the mountains, great climbers and historic ascents of the 8000ers.
Hardback 'coffee-table' style book, with jaw-dropping pictures accompanying the text