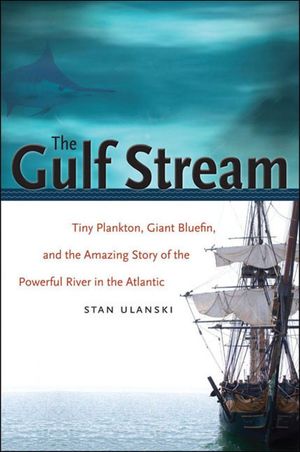 TINY PLANKTON, GIANT BLUEFIN, AND THE AMAZING STORY OF THE POWERFUL RIVER IN THE ATLANTIC

Driving through the Atlantic Ocean is a powerful current with a force 300 times that of the mighty Amazon. First discovered by Ponce de Leon in 1513, it sped ships laden with fortunes in spices, sugar, and rum from the New World back to Spain and also guided the ships of the buccaneers who preyed on them. Later, the current was essential to the development of the transatlantic slave trade. So important were the economic benefits of this ocean conveyor belt to American traders that early maps of it – charted with the help of Benjamin Franklin – were kept as closely guarded secrets.

Stan Ulanski explores the fascinating science and history of this sea highway known as the Gulf Stream, one of the last vestiges of wilderness on Earth. Spanning both distance and time, Ulanski's investigation reveals how the Gulf Stream affects and is affected by every living thing that encounters it – from tiny planktonic organisms to giant bluefin tuna, from ancient mariners to big game anglers. He examines the scientific discovery of ocean circulation, the biological life teeming in the stream, and the role of ocean currents in the settlement of the New World. The Gulf Stream continues to be important today for trade and sport, for the irreplaceable habitat it provides for plant and animal species, and for its key part in changing weather patterns and the climate of the North Atlantic region. The Gulf Stream is an essential introduction to this vital natural wonder.